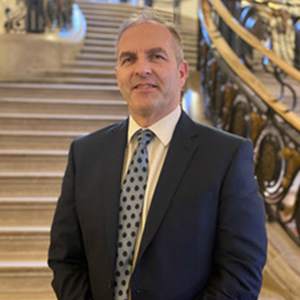 Simon Roberts is CAMORs Director of Security. He is a subject matter expert in protective security and risk, workplace violence, conflict management and the management of protective security intelligence, penetration, testing and training. Simon was awarded his certificate in Counter Terrorism Security Management in 2017 and is a member of the Security Institute. Seconded to the National Counter Terrorism Security Office (NaCTSO) he worked with the CPNI to deliver national guidance on protective security on behalf of the Home Office and Security Service. He was responsible for training 200 Counter Terrorism Security Advisors in the UK to protect crowded places, critical infrastructure, hazardous sites and people vulnerable to attack and targeting.  Adapting to a changing attack methodology he authored, designed and coordinated much of the UKs crowded places guidance, personal security guidance and was responsible for the delivery of interactive e-Learning in that field.

Simon was also the lead for the provision of guidance to protect MPs at their homes and constituency offices. Additionally, on behalf of the Electoral Commission and Cabinet Office he revised election security guidance. Through national exercising Simon led on table top exercises for sports stadia, the night-time economy and transport infrastructure, seeking to protect and prepare crowded places, businesses and infrastructure against terrorist attacks.

A member of Metropolitan Police Service(MPS) for thirty years he previously managed protective security intelligence for the MPS, ensuring all received the best possible advice and guidance. In2015 Simon was responsible for ensuring the safety of the British Olympic Team at the pan- European Games in Azerbaijan. He also led the MPS protective security covert penetration testing team. There he oversaw the security testing of critical and iconic sites around London; reviewing security practices, physical security, policies and protocols and recommending and implementing action. Simon has also worked in the fields of partnership, public order and frontline operational policing. He has been commended seven times for leadership and innovation. He also currently studying for a Masters in Crowd Science and Risk at Manchester Met University.

He is currently working with the SIA to enhance the training of security professionals. He is an approved trainer by the Civil Aviation Authority in General Security Awareness.